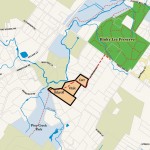 Gesa Sklaroff moved to her home on Yellow Springs Road in 1985. As an environmentalist and an equestrian, she was attracted to the township’s open feel, beautiful woodlands and natural bucolic charm. Her love for the area extended to community work, where she served as one of the founding board members of the West Pikeland Land Trust (WPLT). When Gesa approached the WPLT in 2010 about preserving and protecting her land, the response was a resounding YES!

As the WPLT moved forward with the land preservation process, a much bigger plan came to light – the opportunity to create a publicly accessible trail connecting the 75 acre Pine Creek Park on Yellow Springs Road to the 112 acre Binky Lee Preserve on Pikeland Road. Representatives of the Land Trust approached Gesa’s neighbors, James and Lois Vitale and James and Eleanor Carr, to explore their interest in protecting their land, as well as providing a public trail.

After 2 years of negotiations, the project is now complete. Gesa adopted a full conservation easement for her property and the Vitales established a restrictive covenant to prohibit further development. All properties include a trail easement for public access, including the Carrs, to provide the final link to Dogwood Lane, which in turn connects to Pikeland Road and Binky Lee. 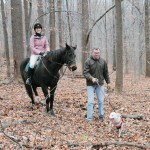 The West Pikeland Land Trust partnered with the Natural Lands Trust to work with the landowners in defining this new trail, which will be part of a more comprehensive trail network throughout the township. “Working with the West Pikeland Land Trust was a productive experience,” said Sklaroff. “Together we explored the benefits and risks of conservation easements, aimed at the special beauty of West Pikeland.” This project was funded by the township’s Open Space Fund established by the Open Space Preservation Tax initiated in 2007, and by a grant from the Chester County Preservation Partnership Program.