West Pikeland Township is located in the northern tier of Chester County municipalities. It is bordered by West Vincent Township to the north and west, East Pikeland and Charlestown Townships to the east and Uwchlan and Upper Uwchlan to the south. Unlike the boundaries of most municipalities, West Pikeland’s is rectilinear, forming a nearly perfect square. The township is located near three major transportation corridors, Route 30, Route 202 and the Pennsylvania Turnpike.

With fertile land and a climate conducive to many agricultural activities, West Pikeland developed as an agricultural community. Its topography is gently rolling with moderate to steep wooded slopes and an extensive stream network. Despite the development occurring within the nearby transportation corridors, West Pikeland has remained fairly rural and is comprised mainly of low-density residential development with no significant commercial or industrial centers. Water quality is high in the streams and creeks that traverse the area.

West Pikeland’s current land use plans may be found in the 1999 Comprehensive Plan and the 2006 Addendum to that plan. Despite decades of focus on preserving the rural character of West Pikeland, however, less than 20% of total township acreage is protected open space. As the pie chart below shows, there is a large amount of land currently at risk of development: 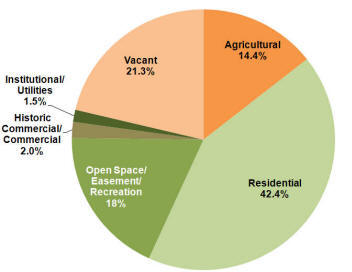